I’m not sure who invented this term but Terry Spurr of the Essex section BKKS is responsible for their popularity, of that I am in no doubt.

So what is a trophy pin?
Basically it’s a pin(badge) made from the ‘centres’ used by the trophy manufactures to customise a trophy. You will find generic ones listed in any brochure saying things like 1st, 2nd, 3rd , “Highly recommended” etc.

For many years Koi Clubs, mainly those holding shows have had them made to personalise their trophies and in many cases this has led to them being issued as legitimate Koi pins, often the first a Koi Club had. Clubs like the Leicester section and the South East section of the BKKS are good examples of this.

Trophy centres are usually made of paper backed plastic and when converted into a pin they are mounted on a variety of brooch mounts obtained from the nearest craft shop. Being little more that a 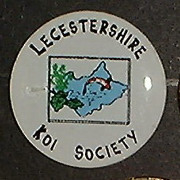 printed piece of paper protected by a plastic cover they offered the pin designer a bit more scope over the heavy brass and enamel pins that were the norm for pins back in the 80’s and before. Trophy centres could carry more detail and were considerably cheaper.

By the late 80’s they had basically gone out of fashion as new pin making technology allowed for more detailed designs as well as lowering the costs. Most Koi Clubs now sported purpose made high quality pins.

The other factor in their demise was the change in the trophies presented at Koi shows. In the beginning the clubs copied the towering trophies still favoured today in Japan. But as time wore on these were replaced with other trophies, often engraved crystal or silver-plate. Engraving took away the need for the ‘centres’.

In 1993 three BKKS sections (London, MSB & South East) got together to hold a combined Koi show at the end of the year. In the process of doing so they ordered trophies from a local shop and had some centres made. The centre comprised of the interlocked hands and the names of the clubs. The surplus centres were turned into pins and given to those taking part. This was a glimmer in the resurgence of the trophy pin.

In 1998 the BKKS changed their trophies for the National show and ordered centres that displayed the year, this trend continues to this day. In 1999 a man called Terry

Spurr, who’s wife Margaret happened to be on the show committee obtained a few centres and turned them into pins, and in doing so brought the ‘trophy pin’ back to life. Terry went on to do the same with centres from the Essex section and create a new chapter in the            history of the Koi pins.

There are now quite a few ‘trophy pins’ available to the collector. We will clearly identify them on the database.