We also decided that we’d have a new pin design every year too. Somewhere along the way the specification for the designer got altered as well, in that the designer had to be a ‘Chairman’ of some sort too. Subsequently we also began to source our designers from abroad and having done Asia, Europe and the USA we were beginning to run out of options.he South East Section BKKS have been running a series of show badges (pins) since 1998. Since that first badge the production of new ones has evolved into a bit of an institution in itself. The original plan was to have a new pin every year depicting a variety from each of the show classes, which would eventually make up a set of 13 pins. 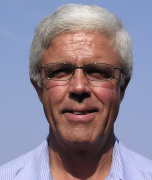 Then fortune lent a hand. Mike Harvey, a South African informed us he was coming to our show. A swift ‘security check’ revealed that he was the Chairman of a South African Koi Keepers Society (SAKKS) Chapter and a pin collector to boot. That was all we needed to know. Our designer for 2004 had been sourced, we would give him the good news at the show.

Come the show and come the moment when Mike was told of his selection we were taken aback by the reaction. The response was quite the opposite of what was anticipated. Instead of showing the pride befitting this great honour, his response was one of abject terror. “I’m not artistic” he said or should I say lied. “Lied’ is not a word you use lightly when referring to a lawyer, but I shall prove my case beyond all reasonable doubt in the next few paragraphs.

In reality we didn’t need his drawing skills; we just wanted some fresh ideas and above all his credibility in the world-wide Koi circles. Being a pin collector Mike was familiar with pin sets and we made sure he had all the existing South East ones before we sent him back home. Our final words were “By the way, next years show class is Asagi/Shusui”

Over the next few months or so, we got regular reports from Mike as he wriggled and squirmed; still protesting that he wasn’t an artist. But eventually these excuses gave way to ideas and talks of African sunsets and Cedar trees in silhouette etc etc. Very ‘arty-farty’ language if you ask me which he followed up with the odd picture to explain what he meant, until finally he sent us the draft. 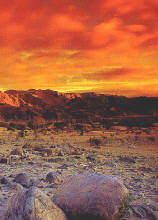 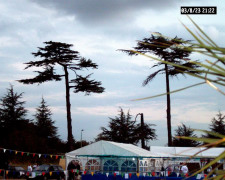 May I present item number 1 “Draft of show pin” as evidence for the prosecution. I submit that this design, incorporating as it does both South African sunsets and South East showground; demonstrates beyond all possible doubt that Mr Harvey has an artistic streak as wide as the Victoria Falls and that on the 26th August 2003 when he uttered that deceitful phrase “I am not artistic” he was guilty of telling the most shameful of porkies* to a fellow koi keeper and pin collector.

Mike’s design, drawn freehand using MS Powerpoint would have been good enough to send to the manufacturers as it was. 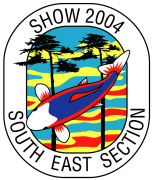 However, in the mean time we had decided that at the 2004 show our selected variety would be the Asagi and therefore we needed to change the design of the fish.

Our section Chairman Dave Brown, already a pin designer of note and a graphic artist was given the design to lay out professionally and to change the fish. On production of the the professional design we contacted the manufacturer and now our 2004 Show pin, the eighth in the series, is in production and will be available for sale by the end of April.

With the South East pin in the production line, the next BIG European PIN event will be the arrival of the Nishikigoi Vereniging Nederland 12th Show Pin. This has been designed by Toen Feyen who sent me a copy of his draft. (Right)

Now, if Toen tells me that he is not artistic, I won’t be argueing with him.