In memoriam of members past

It is with great sadness that we heard of the passing on Friday 10th of  November of one of the world’s most respected ZNA Certified Judges, Mr. Hayamasa Ikeda at the age of 83 years. Ikeda san travelled to many shows around the world and was particularly well known in Holland, UK and South Africa, where he judged many times.
He was a truly wonderful man who lived up to the motto of the ZNA -” Friendship through Scales”. He touched so many lives through the years and will be remembered by so many friends, in so many countries where he visited. R.I.P Ikeda san – you will never be forgotten

Personally I will miss a good friend and teacher. I will cherish the moments with Hayamasa in South Africa (where he emptied a complete restaurant kitchen while checking out the pots and the pans) or searching for him in Amsterdam where at any moment he could slip off the group in some sort of snipers alley.

RIP Hayamasa thank you for everything 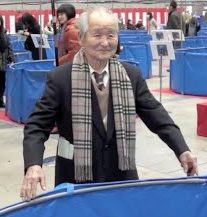 It is with great sadness that we heard of the passing on May 27th of one of the world’s most respected ambassadors of Nishikigoi. Kato-san is well known in international circles as a generous host. His ‘Ikeage’ (Harvesting of mud ponds) were always well attended by invitees from abroad and he has attended many a foreign Koi show as either judge or honoured guest. Although he doesn’t spoke English he has been one of the major instigators of the ZNA’s foreign policy for many years and can count amongst his friends many koi keepers from Asia, Europe, South Africa and the Americas.

Remembering his experiences of meetings with Kato-san, BKKS JSC Chairman Gary Pritchard recalled, “He taught me breeders body shapes on the back of menus in Holland and then showed me perfection with his collection in Japan”.

Vincent Chiu, Chairman of the ZNA Taiwan District put it more succinctly, “He is a real Koikichi, everyone likes him”.

Kato’s impressive profile adequately demonstrates his achievements and the immense experience he brings to the hobby. Born in Tochigi on March 3 1922, and founding Kato Industry Ltd in 1954. He started koikeeping way back in 1955 rising to Tochigi Chapter President in 1981 and qualifying as a ZNA Certified Judge in 1985. Elected onto the ZNA Board of Directors in 1989 he was eventually selected as ZNA Vice Chairman in 2000.

In the Koi pin perspective it would be remiss of not to mention that 1991 ZNA GC, an Inazuma Showa. That fish inspired both the Germans and the Dutch to include it on their society badges (pins). The German KLAN have used it on all their badges, both Inter-Koi and the Tetra Cup, while the Dutch chose it for the 2002 show badge.

RIP Masao Kato and thank you for everything you did for the Koi hobby worldwide!

We lost another of our members (#006) today, Andrew McGill, a staunch member of the BKKS and a reluctant pin collector. He thought we were mad, but eventually,       after acquiring a considerable collection himself, he came around to our point of view. Andrew’s collection came about by way of being presented with them as souvenirs by grateful Koi Show Chairmen for his work as a koi photographer. His claim to fame was that he had been appointed as ‘Official Photographer’ for several BKKS Nationals, Koi America and the SAKKS National in South Africa.

His Koi photography was but one aspect of his contribution to our hobby. Andrew was also the BKKS Collator, responsible for getting the BKKS news into the red pages of Koi Carp magazine on a monthly basis. Andrew had taken on this task since the day the BKKS/Koi Carp partnership was formed which must have made him one of the longest serving Council members.

Andrew also designed, developed and produced a Benching Admin Program which is used by many koi clubs both home and abroad to this day. He also created one of the training/testing parts of the BKKS JSC examination every year.

A man of so many talents, modest and truly selfless.  In so many ways, his memory will live on.

The International World of Koi-keeping lost one of its finest ambassadors today. My friend Vincent Chiu (#003)finally succumbed to the heart problems that had plagued him for years, two months to the day before his 73rd birthday.

Made Chief of the International Division of the Nishikigoi Keepers Society of China in October 1990, he was eventually elected to Chairman of the ZNA Taiwan District in 2002. He was also a ZNA Local Certified Judge.

Vincent confessed to speaking Japanese better than his own mother tongue of Chinese, English coming a poor third in his opinion. Nevertheless, Vincent’s language skills were much in demand and he often acted as an interpreter for visiting westerners in Japan and the Japanese abroad. He particularly enjoyed organising the ‘Fun Tours’ for Kato-san, an activity he was still involved with on the day he died. He was also discussing a potential visit to the Dutch National and the South East BKKS shows for 2005 just weeks before his demise. He was clearly an optimist, and determined to live his life to the full.

He leaves a wife, Lin-May Whea and three sons, Steve, York and Jonny, he will be sadly missed.